For this seasonal installment of Netflix Hack Day I decided to brush up on my 3D skills by signing up for Bruno Simon's ThreeJS Journey course. Afterwards I was inspired to play around with the concept of embedding video within a 3D scene. Here's a small interactive demo I made from that exploration which applies a video texture to a TV model and also incorporates a bloom post-processing effect to make it more realistic.

Taking this idea further for Hack Day, I created Video Views which is a React Three Fiber-based Chrome extension that transports the Netflix video player into a 3D viewing diorama. Check out the video below to see the full demo! 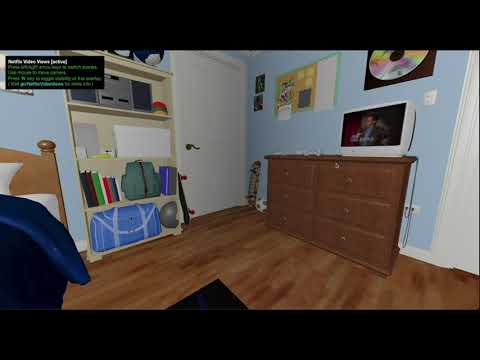 Originally I wanted to use the video stream as a video texture in the same way but due to security restrictions I had to resort to an alternate solution. Thankfully I got decent results by separately applying a CSS transform to the video element. This worked out well since it allowed me to leverage CSS filters to change the appearance.